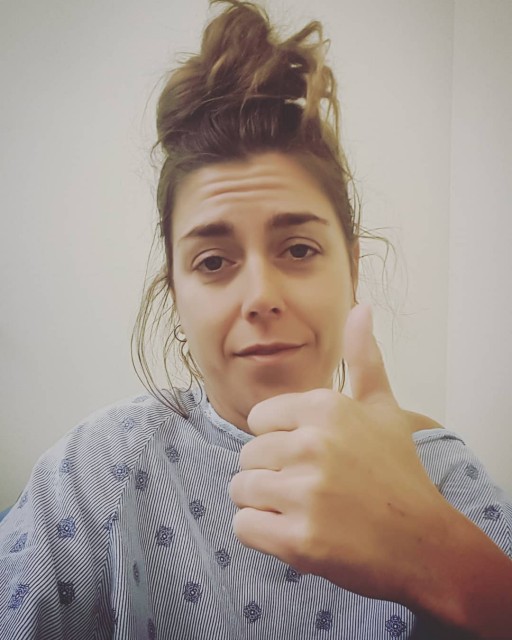 Well folks, I am home from my 7 day stay at the hospital and on the mend from my bowel resection surgery. Ten centimetres of my large intestine and the surrounding lymph nodes has been removed and sent away for pathology, and aside from being tired and unable to fully use my abdominals, I am feeling nearly back to my regular self already. The only outward evidence of surgery that remains are the 13 staples in my abdomen and some bruising from the needles.

Going in to the surgery I was ABSOLUTELY TERRIFIED, but more of the recovery than of the actual surgery itself... I trusted I was in good hands. The night and morning pre-surgery, I wound up taking anti-anxiety medication (which I HATE doing because it messes with my memory) because without it I was near positive hospital staff would have been chasing me through the town in a Johnny shirt. All the fear within me was telling me to bolt. Somehow though, I managed to be at the hospital and ready for surgery at 6:15 am on September 25, 2019. I remember nothing other than arriving at the hospital and my anxiety being through the roof. The surgery took 2 hours.

The first 24 hours post surgery I was pretty groggy and also don't remember much other than that my good friend and family were there with me and that my back hurt like a mother forker. I vaguely remember cursing like a sailor, dropping F-Bombs left right and centre over my back pain and then realizing I was in the SIMCU unit with 3 other people and apologizing for my profanities. I was later informed that in order to perform the surgery, my body had to be quite contorted which caused in my SI joints (which give me a hard go on a good day) to become quite jammed up. This resulted in the back pain I was currently experiencing. Another lady, Helen (pictured in the album below), who had the same surgery as me on the same day and apparently has a better back than I, did not experience any back pain at all... lucky duck. To be honest, I barely felt the pain of the incision at all as it was practically negligible in comparison to my back pain. Thank God for hospital administered Dilaudid is all I can say. The afternoon following my surgery I was upgraded to a semi-private room and three days after that a private room.

One of the most nerve wracking parts of this whole hospital stay for me was waiting for my bowel to function again. Post bowel resection surgery the intestine goes lazy for several days, essentially ceasing to function. Waiting for one of my vital organs to wake up and work again was a somewhat scary experience... I couldn't quite feel like I was 'in the clear' from surgery until it began to function again. Passing gas is the first sign that the bowels are beginning to wake up and I was informed by the nurses that walking helps so I walked around the hospital as much as I could. My pace was slow but steady, and I was DAMN DETERMINED to fart. Frequently on these walks Helen and I would cross paths and update one another on the status of our bowels. It was really nice to have someone to talk with who had just been through the same experience as I. She was the first to pass gas and I'll admit I was totally jealous. The buildup of fermented jello, popsicles, sherbet and broth in my abdomen was starting to get fairly uncomfortable.

Four days post surgery I FINALLY farted. It was a piddly little joke of a fart, but a fart none the less and I WAS ECSTATIC. Shortly thereafter I broke down crying with gratitude for the fact that my bowel was starting to function again. This milestone also granted me the ability to be upgraded to a full liquid/soft diet and I was soooo excited to have oatmeal for breakfast the following morning. By this point I was 100% sugared out and didn't want to even look at another bowl of Jell-O. It took a little over 24 hours before I passed gas again but this time it came as huge and glorious room clearing farts with big tummy rumbles that confirmed with vigor that my guts were back in action. Another sigh of relief and perhaps a huge shit eating grin and a giggle or two. Four days of gut fermented food smells rotten beyond belief, let me tell ya. That evening I also had my first poop and my nurse and I both shared in my excitement. "I feel like confetti should have fallen from the ceiling!" she exclaimed. I concurred... by this point I had spent a large amount of time walking around trying to get my hugely uncomfortable gas baby out. My reward for pooping was REAL FOOD the next day and my gluten free spaghetti lunch was the most amazing thing ever. Food never tasted soo good.

During my time at the hospital, every little improvement felt like a graduation worth celebrating: having my catheter removed, having my IV (whom I referred to as my robot friend) removed, being able to decrease my pain medication, being bumped up from a clear liquid diet to a full liquid/soft diet to a REAL diet, farting and pooping... all were little miracles that filled me with joy and delight. I was dismissed from the hospital exactly one week post surgery on October 2, 2019 and have been spending my time since resting, snuggling my big sooky fur baby Charlie Ray (cat), and taking short walks out in nature to admire the beauty of autumn. Aside from being tired, having these itchy staples in my abdomen and the newly stretched section of my bowel feeling somewhat uncomfortable as things pass through, I feel pretty much back to normal. As an added bonus, I am not allowed to lift anything above 10lbs for the next 4-6 weeks so other people get to do my dirty work for me. #cancerperks​

During my stay at the hospital I also shed A LOT of tears, but in contrast to the tears I shed prior to surgery, these tears were tears of pure gratitude. Going through this surgery shifted my perspective again and made me realize all of the things that I do have and how special all the little, seemingly insignificant things (like farting) in life actually are. I was soo grateful for my family and close friends for being by my side and all the messages of support I received. I was also incredibly grateful (and very lucky) to have had my Mother, Father and good friend rub my back and butt muscles out a few times a day (which helped astronomically with easing the back pain). Additionally, I was TRUELY AMAZED at the ability of my body to heal. I could not believe the changes I felt within my body from day to day and even morning to night. I was improving beyond what I thought was possible. I also snuck a mouse sized piece of cheese during my clear liquid diet phase and totally cried at how amazing it tasted. Surgery and hospital administered drugs do weird things to the human brain...

So... in line with amazement in the body's ability to heal, my staples come out tomorrow and I am suuuuuper excited!!! Although I am grateful to have them because I was told stitches are much more uncomfortable to come out, I still find it somewhat disturbing that I have staples in my body... it just seems so wrong and 'Frankensteiny.' Additionally they are SOOOO freakin itchy!!! But, being weirded out and itchy is a small price to pay for your health so I'll suck it up. I also should have the pathology reports back from the section of bowel removed sometime in the next few weeks and I'm feeling positive about the outcome. The surgeon could not make any promises, but did state that she could not visibly see any evidence that the cancer had spread while she was digging around in my insides parts (Whoot!). So here's to hoping that my journey with cancer is over. I certainly learned MANY lessons from the experience.

In addition to thanking everyone who supported me, visited me, sent me messages or good vibes during my stay, I want to extend a HUGE thanks to ALL of the staff and volunteers at the hospital. Everyone was super friendly and made me feel very comfortable and cared for during my stay. I would also like to extend a special thanks to my surgeon for doing a wonderful job, making my incision as small as possible, being very informative and checking in on me daily. A++ team, A++.

Cheers to life and thank you for following me on my journey of discovering what's possible! 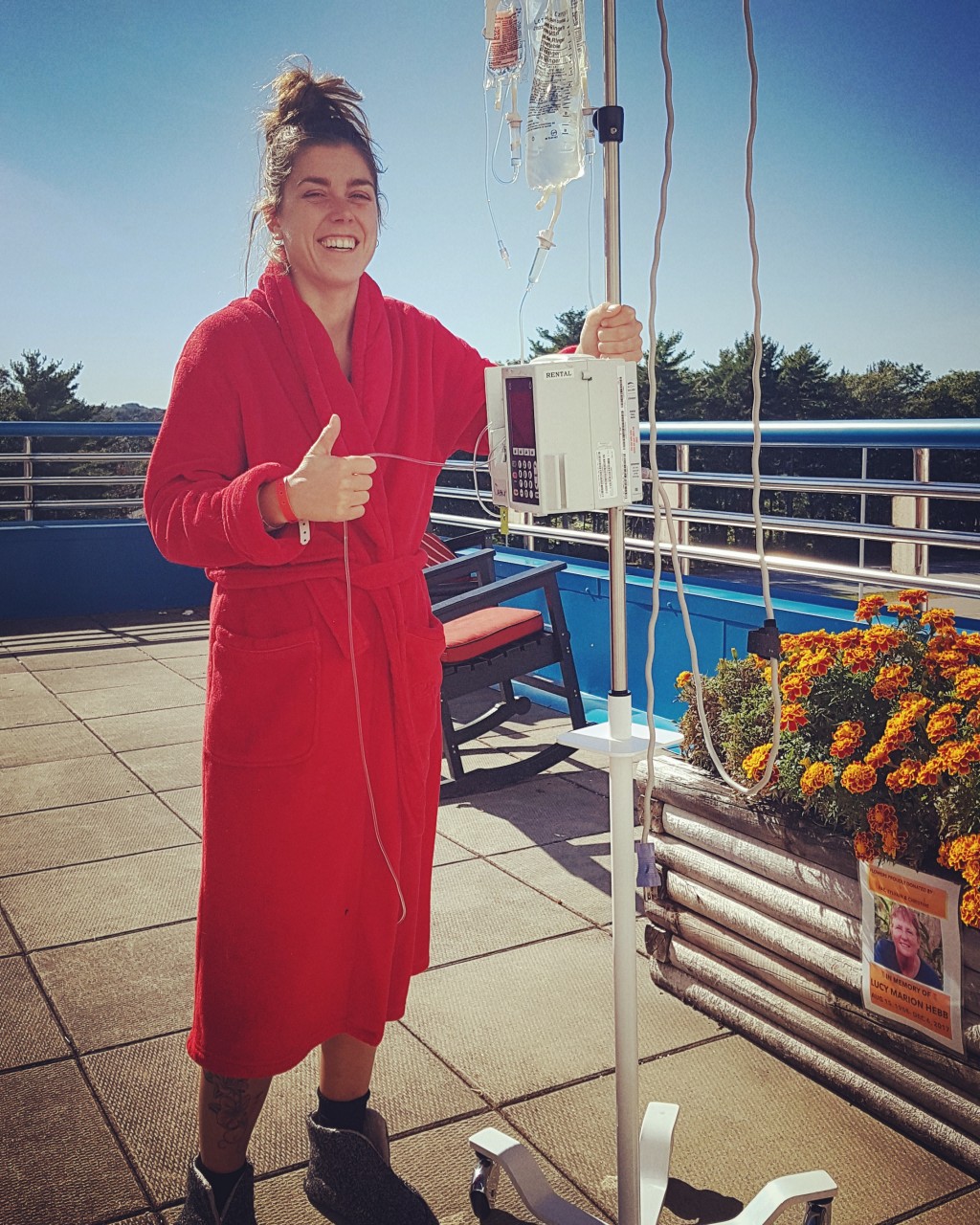 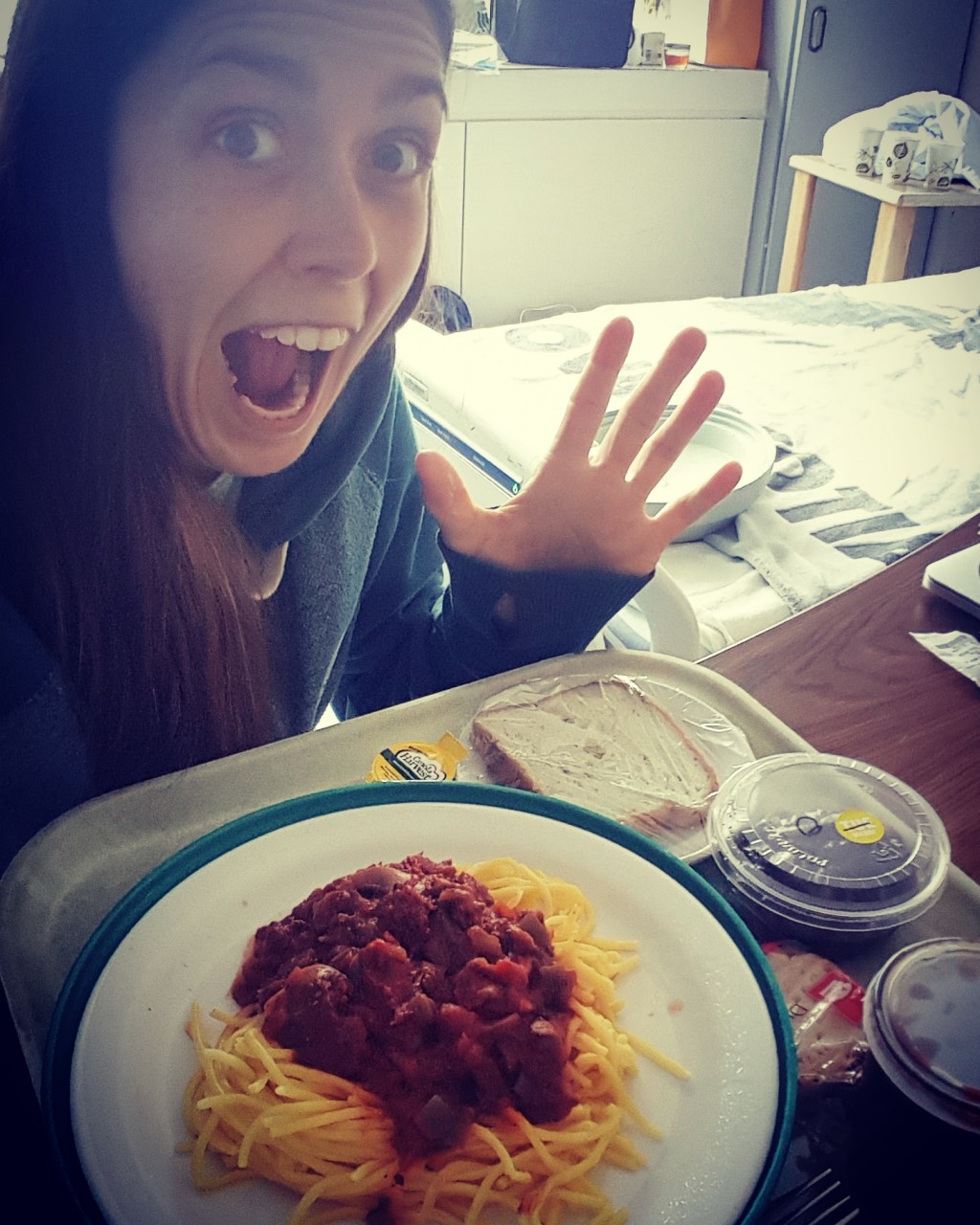 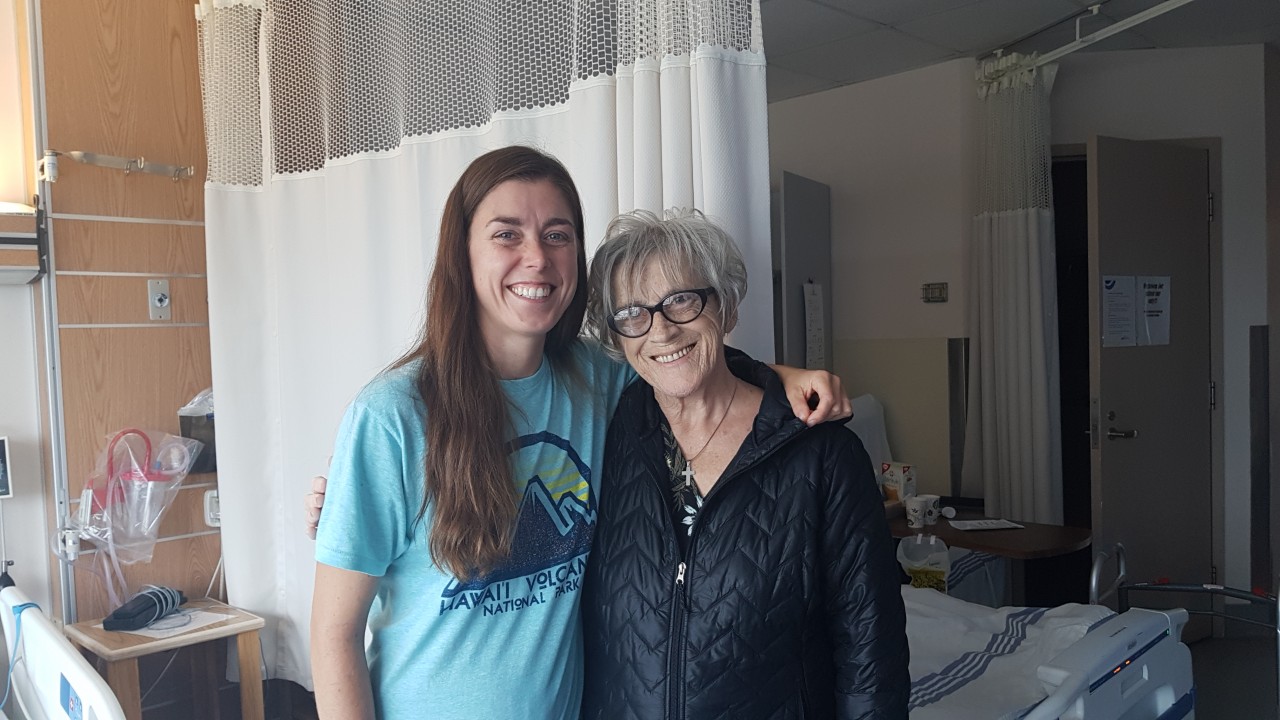 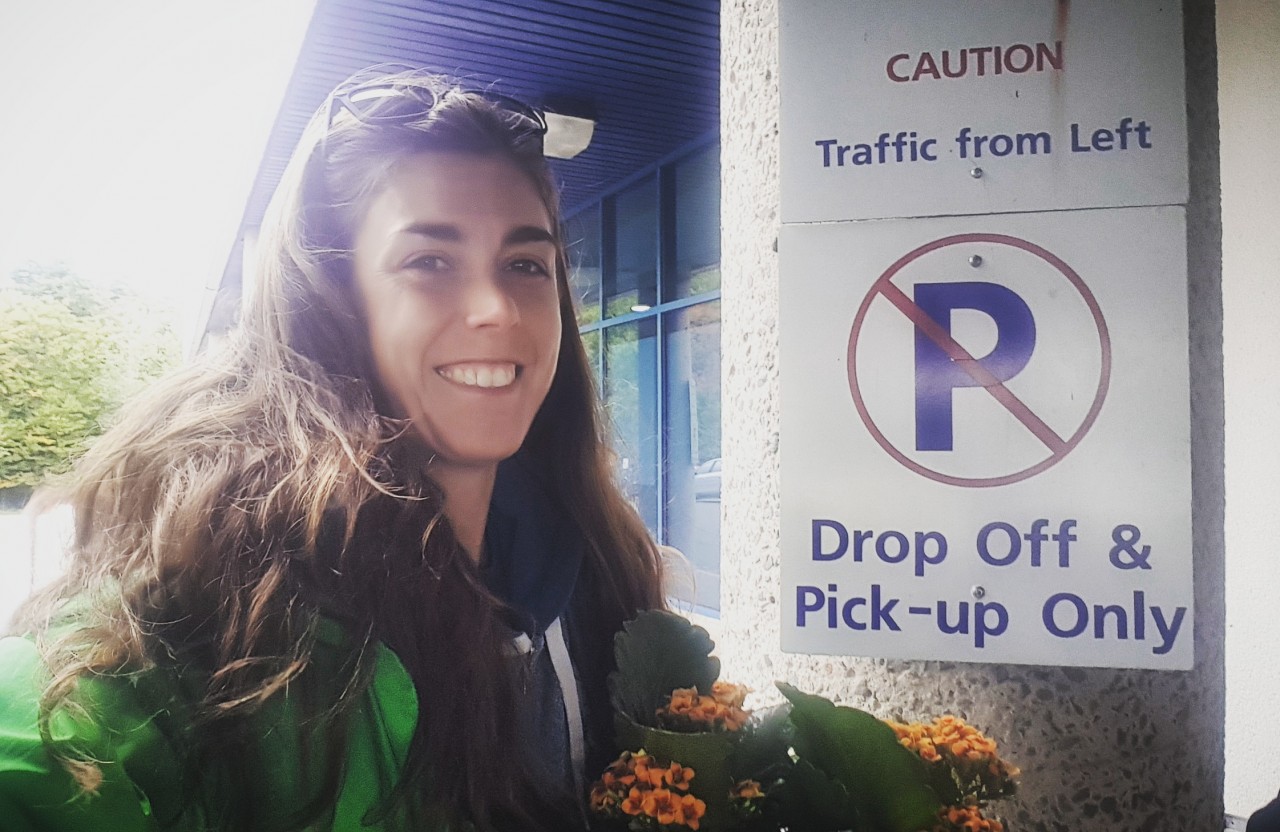 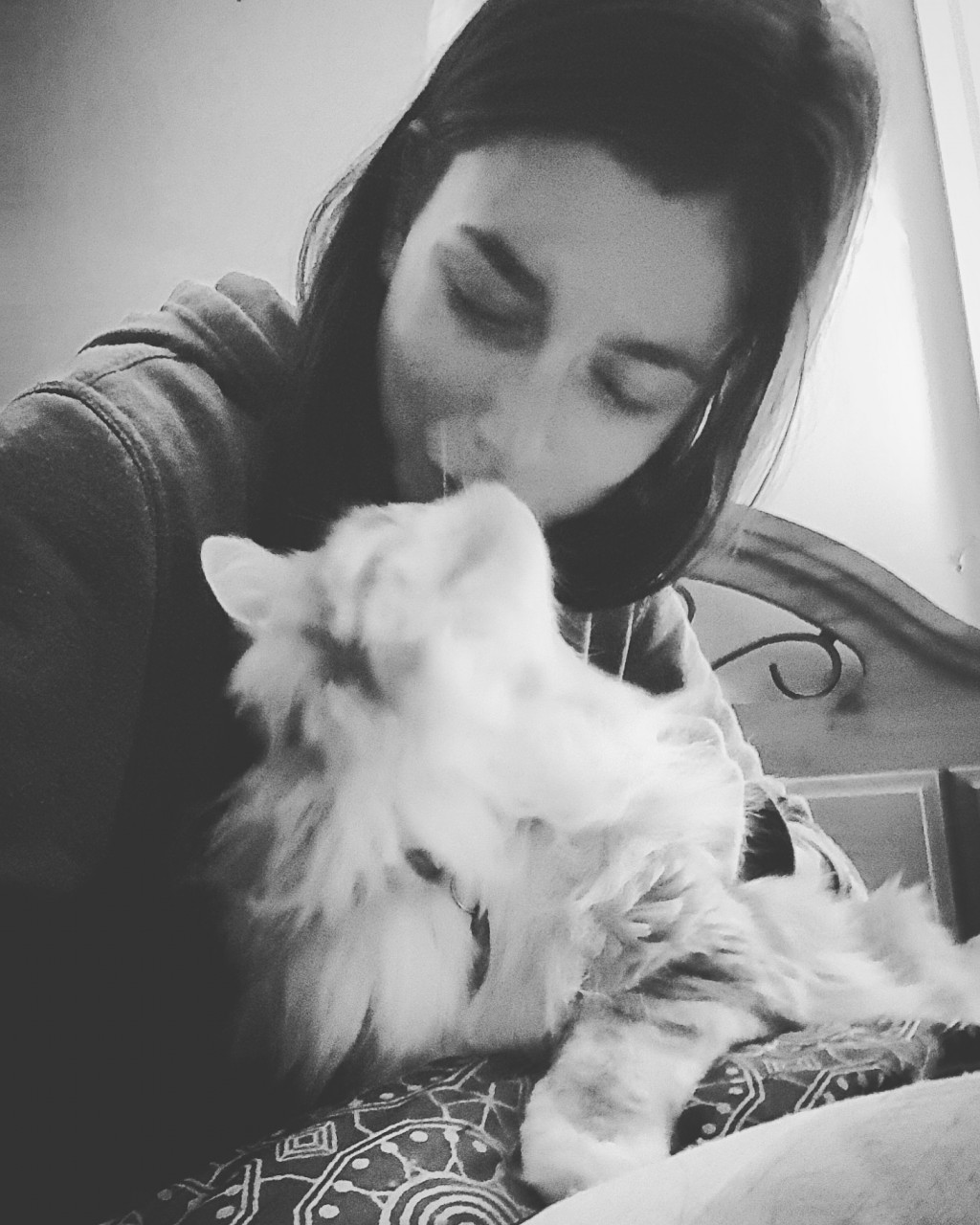 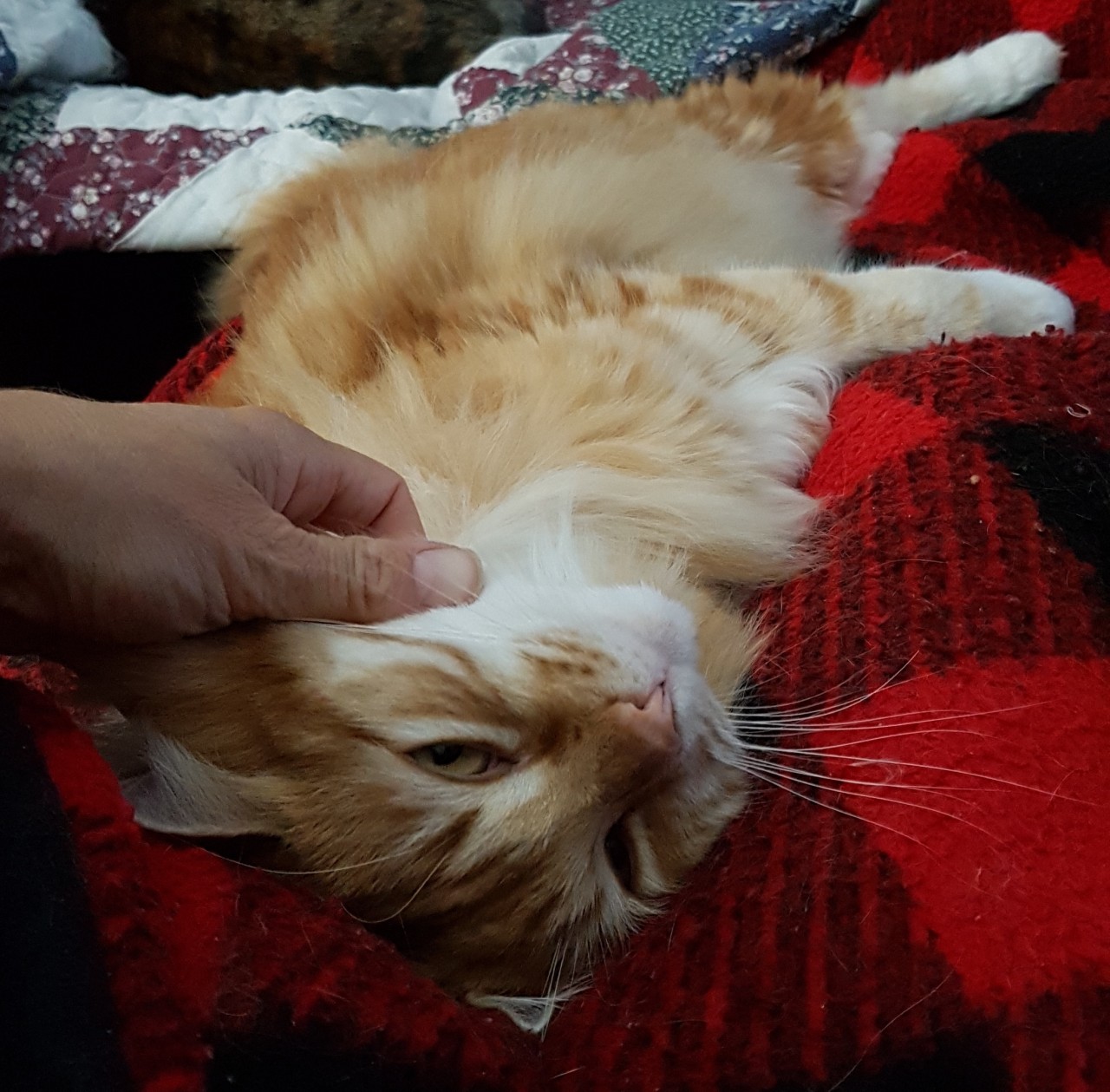 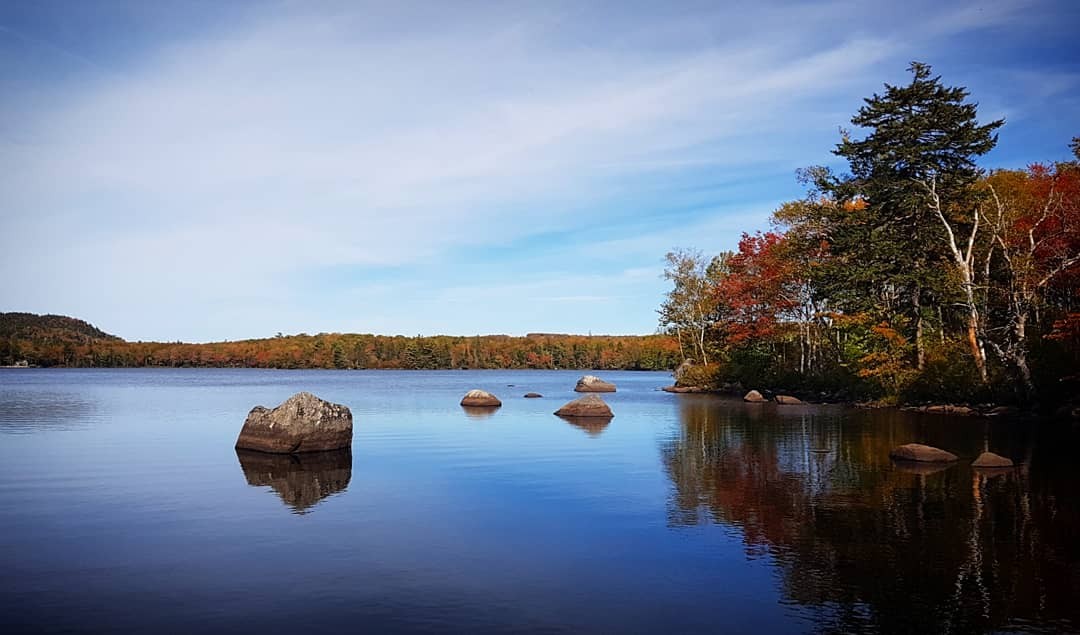